Eddy current braking is a state of the art braking technology that has both economic and risk management advantages. This unique braking system takes the simple function of magnetic and non-magnetic forces and turns it into a high tech masterpiece. Using these forces as a braking mechanism stems from the purposeful generation of eddy currents in order to slow a movement. Eddy currents are formed when a conductor moves through a magnetic field, which generates opposing forces that swirl within the conductor. This reaction between forces provides the perfect conditions for smooth deceleration. If you're interested in reading more about the science behind eddy current technology, then you can click here to learn more.

The risk management improvements and economic advantages that accompany the eddy current brake has made it a popular choice among engineers when developing new technologies or improving the old. This intricate network of magnets is used more commonly than you might think. Recognizable uses for eddy currents are all around us. They exist in the home and in the work place. Here are 5 familiar applications of the eddy current brake. 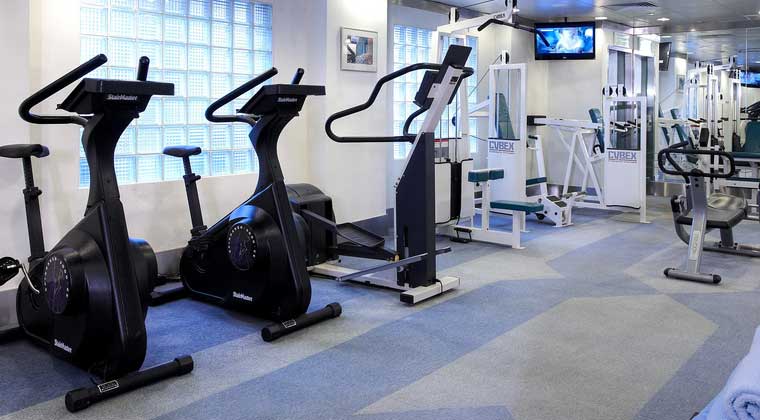 One of the most common places we may see eddy currents at work is while weÃ¢â‚¬â„¢re putting ourselves to work. Exercise equipment utilizes this innovative technology in many ways. Modern work out machines use eddy currents to create a smooth transition between resistance levels and make for low maintenance machinery. This use diminishes harmful and abrupt changes in pace which allows for a more enjoyable work out experience as well as producing high quality machines.

Popular equipment such as stationary exercise bikes are a great example of eddy currents in action. Programming the bike to simulate an uphill climb increases the drag between the non-magnetic conductor and the permanent magnet in the bike making it more difficult to keep peddling. By continuing to increase the incline the eddy currents become stronger and stronger and continue to create a more difficult work out.

Eddy current braking can also be found in rowing machines. Rowing machines provide eddy currents to match the resistance implemented by the user, meaning the harder you pull the more resistance you'll experience. This is a unique way of using this kind of technology within work out equipment. The magnets are used to mimic the intensity of pushing an ore through water. The person using the machine gets to experience the strength of eddy currents and the magnets associated with the braking system in a hands on way. 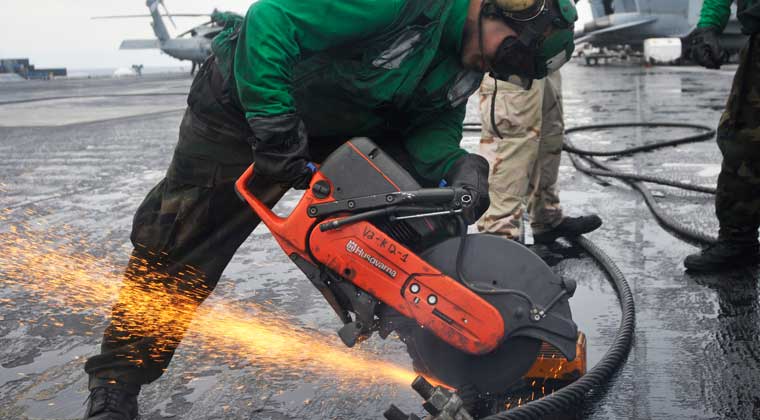 Since the creation of eddy current braking systems, they have been adopted into many forms of useful technology and more importantly, industrial use. Power tools and large industrial machinery use this technology for several applications. One of the main uses for eddy current breaking is in emergency shut off. Industrial factories and even common power tools have concerns with safety, which makes emergency shut off a must have. Moreover, if a power tool such, as a power saw or electric drill are shut off, the eddy currents kick in and safely bring the machine to a halt. This type of braking is used within the machine even in everyday use by forcing the mechanism to stop spinning. This is a fascinating way eddy currents are applied to everyday items that we otherwise wouldn't suspect.

Just as we wouldn't suspect eddy currents to be used in run of the mill power tools, they are actually used in common home features as well. We all have meters on our houses that are constantly recording how much power we use everyday. Although it may seem like an unlikely place to find complex magnets at work, electromechanical meters are perhaps the most common place to find eddy current technology. The meters are put into use every time you use energy using the unique network of magnets to propel a disk within which is then recorded by the numbers on the meters exterior. This may not be one of the most tangible uses of eddy current systems, however, it is the common and the most used. Eddy currents are in many forms of industrial equipment. Power tools and electromechanical meters are perhaps the most popular. 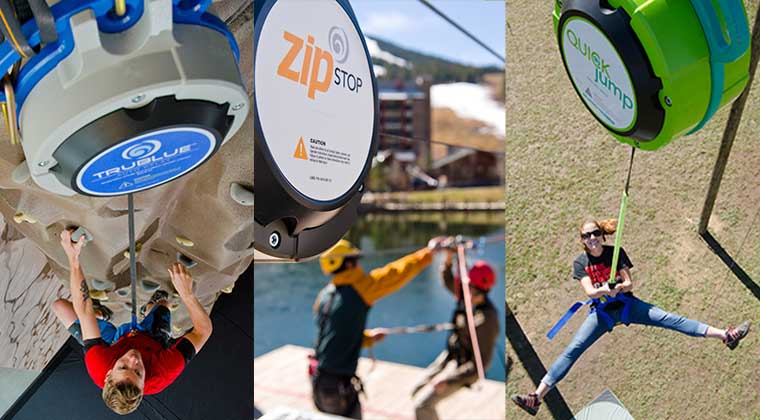 The uses for eddy current brake systems are countless. Common recognizable ways they're being used daily are through entertainment and recreation equipment. The low maintenance cost and remarkable safety features are what make eddy current brakes perfect for family friendly environments. Indoor rock climbing gyms and high ropes courses often have auto belays in their facilities. Head Rush Technologies, TRUBLUE is the only auto belay on the market that uses eddy current braking in order to safely assist climbers in their decent from the top. The eddy current brake is a climbing must because it provides a constant slow ease in the climbers decent. The high tech features allow auto belays to be self-regulating to provide the same level of comfort to a wide range of weights. This interchangeability is what makes the eddy current braking system such a valuable asset to auto belay manufacturers and family attractions.

A unique way the eddy current system is used for recreational purposes is their appearance in zip line brakes. The zipSTOP Zip Line Brake is currently the only zip line brake that uses this intricate system. This type of brake is preferred by zip line facilities because of its low cost of ownership and ability to accommodate a wider range of customers. Using eddy currents in this way eliminates the use of rider participation in the zip line braking process, which increases safety features and allows riders to sit back and enjoy the ride. The unique qualities of eddy current zip line brakes allow riders to achieve higher speeds in a safe and exciting manner.

Free fall devices are another type of recreational equipment that use this unique braking system. A free fall device is a mechanism that utilizes gravity and the rider's weight to create a true free falling feeling. The QUICKflight Free Fall Device is a unique unit that uses eddy currents exclusively as a part of Head Rush's patented braking technology. They include eddy current braking to catch the participant and slowly lower them to the ground comfortably. Free fall systems, zip line breaks, and auto belays are a great way to put eddy current braking to the test! 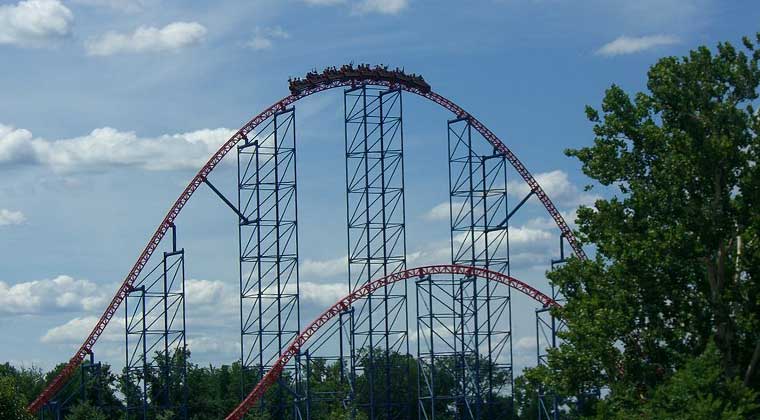 Extreme uses for the eddy current brake are seen in amusement parks and entertainment centers all over. Whether this is in roller coasters or other rides, braking technology such as this is vital to amusement parks around the world.

Modern roller coasters adapted this kind of technology to allow for a smoother and safer stop for its riders. The high-speed experience makes for maximum fun but also requires an extremely safe braking system such as the eddy current breaking system. Eddy currents allow roller coasters to change speed and direction quickly while remaining safe for everyone on board. By harnessing the force produced of opposing magnetic fields, the roller coaster train will decelerate when the it rolls over spots on the tract that induce eddy current thermal technology. This system is typically used at the end of roller coasters or after the train undergoes a tremendous drop or increase in speed. Similar to the use of eddy currents in a rowing machine; the faster a roller coaster train is, the faster it will decelerate. The long-term use of this high tech equipment is ideal for all amusement facilities because it is unaffected by weather and requires very low maintenance. Popular rides such as Disneyland's Tower of Terror and Six Flag's Superman use this innovative technology to catch the falling haunted elevator and slow a speeding super car in order to provide the ultimate exhilarating experience for those on board. 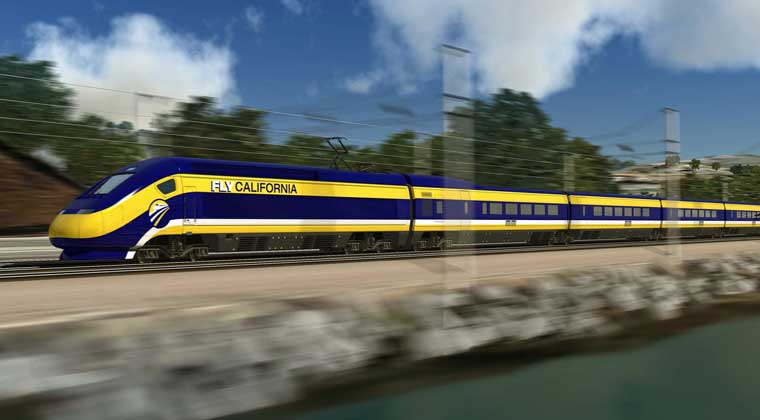 Transportation technology has adopted the innovations in eddy current braking to create safer braking systems and new high-speed railways. Eddy current braking is a remarkable option for transit systems because of its low cost of maintenance and resistance to harsh weather conditions.

Eddy currents are a safe way to decelerate a moving train while providing constant comfort and ease for passengers. By adopting this type of technology, commuter, high-speed, and even streetcar trains have been able to reach new speeds and provide safety levels that are better than before. In a world with such a high population of commuters, new transit systems have been sought out in order to accommodate a larger number of people who are willing to commute via public transportation.

Many new trains have mastered the use of eddy current braking to produce convenient, safe, and fast travel. High-speed trains were developed in the 1960's but have developed greatly to create a new experience for a more high tech world. The opening of Eurostar in 1994 marked the existence of one of the first and most well known international high-speed trains. Running at speeds of 186 miles per hour, the Eurostar can transport passengers from London to Paris in just 2 hours and 20 minutes. The creation of the Eurostar allowed for eddy current braking to be used by millions.

In more recent improvements, engineers behind high-speed railways have harnessed the reaction used in eddy current braking to create eddy current linear tracks that allow trains to move up to 300 miles per hour. These types of high-speed trains are sparse and still in the early stages of development. However, this type of eddy current technology is planning on being used in the production of a train connecting the San Francisco Bay Area to Southern California areas such as Los Angeles and San Diego. The creation of this high-speed railway will create a solution for the growing population in California as well as contribute to diminishing the environmental damage produced by cars. This is a modern use for high-speed trains that is a fascinating application of the eddy current brake.

Eddy current braking technology is a useful tool in a growing world. Innovations in exercise equipment, industrial tools, entertainment, roller coasters, and transportation are just the tip of the iceberg. As new advancements are being produced a safer and more efficient world is being born. The eddy current brake can be applied to many things in our everyday world, even more than we might expect. Take notice of everyday applications of this high tech innovation!"

Counting down the top 5 climbing games that you can play at your Fun Climb or Family Entertainment Center. These games are beginner friendly and pure fun.

An Interview with John Brosler: The Fastest American Man in Climbing

Team USA’s John Brosler talks about his journey to becoming the fastest American man in climbing, the upcoming 2024 Olympics Games, and how his training changes between different climbing disciplines.

Running a successful FEC is anything but easy. These are four steps that we’ve taken to simplify the experience of owning and operating a TRUBLUE Auto Belay.