When you think of Chris Sharma, the first thing to come to mind probably isn’t falling. He was, after all, widely considered the best sport climber in the world for over a decade.

So no, when you think of Chris Sharma, the first things to come to mind are probably his sends, rather than his falls. You probably remember how he was the first person to redpoint Necessary Evil, Biographie, and Jumbo Love. You probably remember those crazy deep-water solos he pulled off in Mallorca and how he worked La Dura Dura with Adam Ondra until both climbers finally made it to the top of the hard hard.

You probably thought to yourself, “I wish I could climb like that,” without considering the thousands of falls he took along the way. Like this one (check out what happens at 2:03). Or this one. You get the idea.

Climbers fall. And then they get back up and try again.

When you’re climbing on auto belay, you won't be taking any whippers like in the videos above. But that doesn’t change the fact that falling is an integral part of climbing. You climb, you fall, you brush yourself off and try again. Who knows? Maybe you’ll fall slightly better next time.

Whether you’re the best climber in the world or you’re just starting out, that’s the order of operations: climb, fall, repeat. Because the truth is, there’s no shame in falling. Falling means that you’re pushing yourself right up to the limit of your abilities. The more you fall, the better you will become.

At Head Rush Technologies, our goal is to give you the best climbing experience that you can possibly get on an auto belay. The way we see it, falling is a huge part of that experience. We engineer our TRUBLUE Auto Belays to give a smooth, consistent, comfortable descent, no matter how wildly you come off the wall.

When we designed the all-new TRUBLUE iQ+, we decided to take it a step further. Instead of lowering after a fall, with iQ+ you can skip straight to the “try again” phase. Or, as Sharma says, “With the iQ+ you’re just able to stop there, rest, shake out, try to figure out the moves.”

In other words, TRUBLUE iQ+ climbers can fall as many times as it takes to finally power through a difficult move. That means spending more time pushing your limits and having more opportunities to finally make it to the top of your favorite routes.

Beyond being one of the best rock climbers of all time, Chris Sharma has also founded multiple climbing gyms. From a gym owner’s perspective, he sees the TRUBLUE iQ+ as more than just the next step in auto belay innovation, but as a way to actually attract more climbers.

“I’m really excited to have this new device in our gyms,” said Sharma. “It’s really going to help us just continue growing the sport.”

by Ian Gammie
Posted in: Climb
Related posts
5 Features Every Modern Climbing Gym Should Have 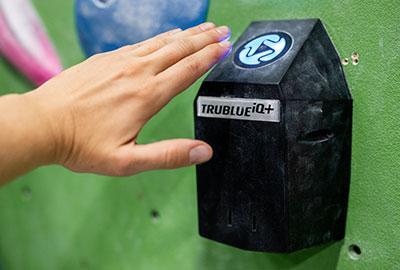 Catch-and-Hold: What is it and how does it work? 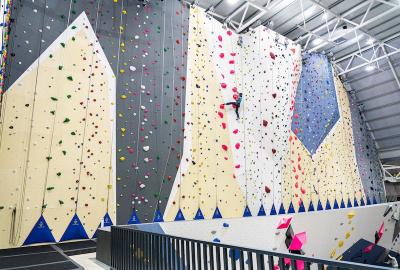 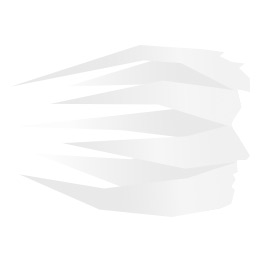 Product Comparison: What’s New About the TRUBLUE iQ Series
Technology to Improve the Accessibility of Your Facility
Watch Chris Sharma Climb the Crux on TRUBLUE iQ+
5 Features Every Modern Climbing Gym Should Have
The Role of Auto Belays in Self-Care
8 Auto Belay Safety Measures
Overcome Negative Impacts of COVID with TRUBLUEs
A Sit Down with Emma Hunt, TRUBLUE's Latest Sponsored Athlete
Catch-and-Hold: What is it and how does it work?
Campus Rec Centers Can Bring New Training Opportunities to Collegiate Climbers with Auto Belays
Copyright © 2021 Head Rush Technologies